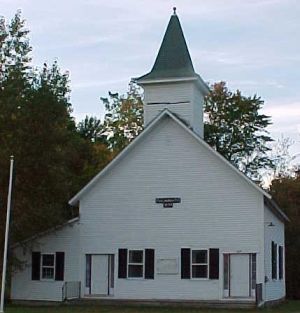 It began as a Methodist Church, built in 1859, but was active as such for only a short time. The Calvinist Baptists borrowed the building for a time in 1877-8, while their own new church was a building on the nearby hilltop. Then the Free Will Baptists borrowed it, and for some years it stood unused. Eventually, the Purling Beck Grange No 268, organized in East Washington 1898, came to the rescue. They purchased the building for one hundred dollars and promptly gave it to the local Baptist Society in exchange for an unconditional lease for as long as the grange holds its New Hampshire charter. For a hundred years it had served comfortably as Grange Hall and community center for the village of East Washington. "Purling Beck" is Swedish for "babbling brook." When the Purling Beck Grange disbanded in 2004 the building reverted back to the East Washington Baptist church in accordance with an agreement made in 1901.