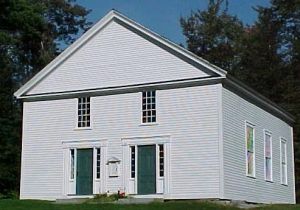 This humble and picturesque building in the southern part of Washington is honored as the Mother Church of the Seventh-day Adventists, today a world-wide denomination with over eleven million members and with churches in over 200 countries.

It was the meeting house build in 1842 by a local group of farmers calling themselves Christian Brethren, who dissented sharply from the strict Congregationalism of the Church in Washington Center. Many of the Christian Brethren became Adventists about the time this building was first used, and thereafter some of them began worshiping on the Seventh Day; and eventually the majority did so.

In 1862 the Seventh-day Adventist denomination was born at this place and this was recognized as the first church.  The building is kept in good repair and is a regular point of pilgrimage.