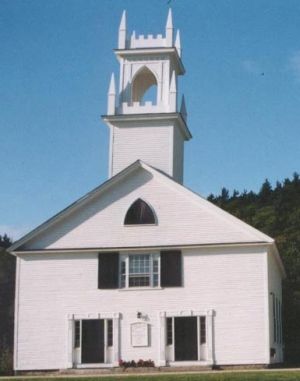 The Washington Congregational Church building was erected not far from the original Meetinghouse on the Washington Common in 1840.  (It was then called "The New Meetinghouse.")  Putting the new Church in the town center provoked controversy at the time, and out of this came the Christian Church, two-and-a-half miles to the south, which later became the first Seventh-day Adventist Church in the world.

The building and its sanctuary are of the traditional New England style, white inside and outside, simple and somewhat austere.  It is likely that the pews in the sanctuary were recreated from those taken out of the original Meetinghouse.

During the 1980s the building was raised and foundation walls and full basement inserted.  The Church has been in continuous use since 1840 and holds worship services -- welcoming all -- each Sunday morning.  (10:00 am ). The Pastor of the Church is the Rev. Beth Simmons.