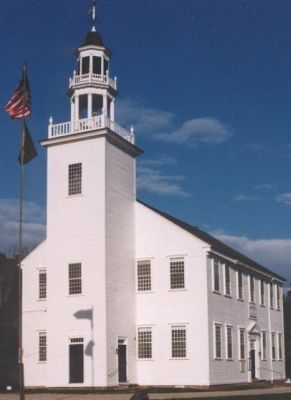 The Washington Town Hall was called a meetinghouse when it was erected in 1787. A hundred years later it was known as the Town House; today as the Town Hall. It is built along classic lines and proportions and originally there was nothing unusual about it; it was one of hundreds like it. Now it is a very rare specimen. Originally, the Congregational Church and the town shared the use of the building. When it was built there was a two-story enclosed entrance, called a "porch," at each end.

In 1825 the bell tower replaced one porch (the other is still intact), and side and transom windows were added to the front door. Later in the 19th century, the interior was altered to accommodate new uses: the lower box pews were removed, and a floor inserted to create two stories. Town meetings were held here for over two hundred years until the space available became too small (1990s), but the building has always been, and is now, in daily use for town business.

The building is well-cared for, and for over a hundred years no major changes have been made in it. A small book, A Sacred Deposit, available from the Washington Town Clerk, gives a complete history of the building.